Poem 17 I wrote on the beach some time ago, in the back of a book I was trying to read for the upcoming fall semester. I wrote a lot of poems in those books… not all of them were important enough to make it onto the blog… 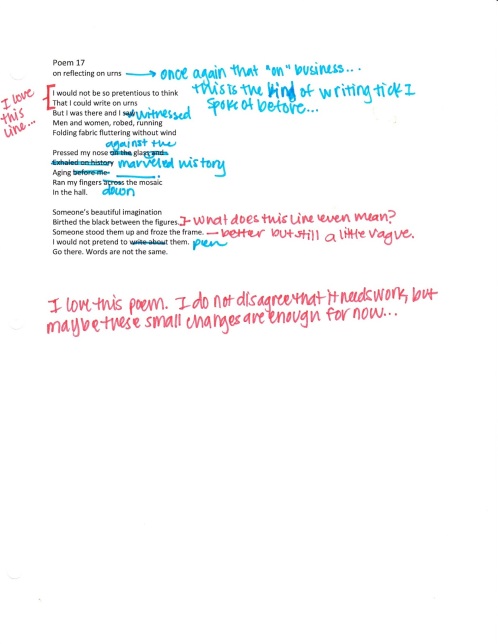 I had just returned from london and felt myself clever to be in conversation with Keats’ urns. It was little more than a quip at the time, but every poem has a charm that reveals itself over time… now that I feel comfortable editing, we can talk about a little thing I like to call pulling the horse.

Horses are big, stubborn animals. They don’t like to be pulled, they would rather be lead. So you can lead them in a simple sense, but must mantain the control and assertion of pulling. With a horsel like Keats’ poem, I want to be sure that the allusion I make in those first lines is strong enough to make the connection without taking anything from his work.

Copywrite on intellectual property is a big deal. Especially these days. No one is going to lose their cool over an allusion to Keats, Shakespeare, Pound, Witman… but being in conversation with living poets like Dove, Giovanni or even the recently late Heaney takes a little more tact. The copywrite a poet has on intellectual property is their life plus 75 years… and that’s not in special cases of collaboration. So work that you may be drawing inspiration or feedback from might be protected by those laws. The rule of thumb is 10%, don’t use more than 10% of a piece in your own and remember that that 10% can’t be the integral portion. did I say 10% enough? 10% 10% 10%…

There, the Media Arts major in me is satisfied. As far as pulling that horse along with your work, I try and make the allusion clear and obvious from the start. Almost like introducing yourself at first as to not be confused. What am I talking about? Urns… this one is pretty stupid proof, but others may need a thicker chord for pulling. Bigger, older horses need less work to persuade; young, restless ones might need a whole saddle… Just keep in mind that an allusion should ADD to a poem and not be the entirety of it.

In the end of this one I get a little vague… try and make the rest of the poem important enough to plau with the big leagues. There’s never a reason to link a shitty poem to a great one. The horse is a clever animal, it will know if the one pulling is a good or poor leader. This is turning out to be a silly little metaphor… haha, but maybe that will make it stick.

Allusions are great tools. They foster something I have grown obsessed with: the literary conversation. But they need to be treated as importantly as they deserve. There’s nothing worse than a bad poem that links to a great poem, and nothing more dissapointing than a strong, worthy allusion that isn’t made in an undertandable way.

Does this one work? You be the judge I suppose.

Make allusions but be wary of the rules and regulations that may govern your connection with another work. Keep in mind that 10% rule and look out for ways to make the connection stronger if needed. Pull the horse with as much force as needed and no more. No reader wants to feel as though you are talking down to them, but they do want to be part of the conversation.