Putting characters on the board is a tough play for a poem. There are so many other litarary forms better developed for characters that the poem sometimes struggles as a medium. 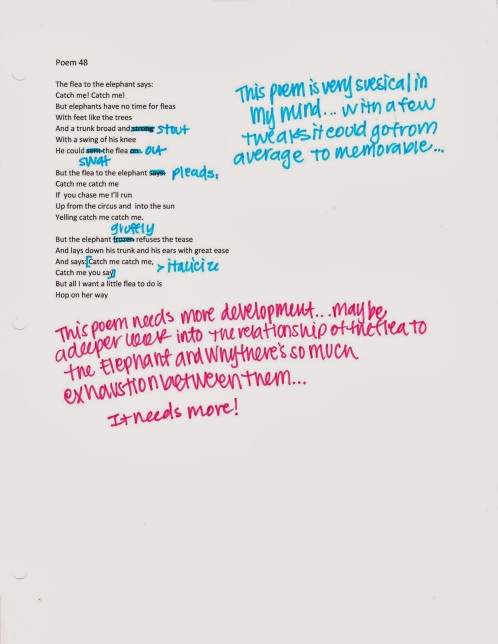 There are things that we are working with that allow us to bring a better image without wasting words. Animals, tropes, symbols can all shorten the word count of a character poem. For this one, I have chosen circus animals, but of course the first draft was a little lacking in relationship.

So here’s the mistake I made that tends to be pretty common. The symbol, animal, trope needs to be important in this poem as well as other places in the literary conversation. Without that ‘right here’ importance there is no reason to use the character at all. By that I mean, the flea and the elephant are completely different characters. They cross paths here and what did I learn as the reader?

In the first draft, the elephant is an ass and the flea really needs some adderol (sp?).

At the second draft we see why the elephant is short on temper and a little of what the flea wants. There needs to be more. But the second version is a little better. Keep in mind the limitations and advantages of bringing in characters and let the poem mean something valuable on its own.

Poetry needs to to borrow from the culture that breeds it, this is a Truth. But at the same time each poem needs to be valuable on its own. This first draft is a good example of why most poems sit in the surface and don’t go anywhere. They borrow without giving back.