One of the greater joys of being a poet is using words in their many forms junxtaposed for greater meaning. It’s a bit of a thrill honestly. There are no greater hacks to language than the multiplicity of words (that’s the new buzz word these days, hacks, bit of a silly concept really). 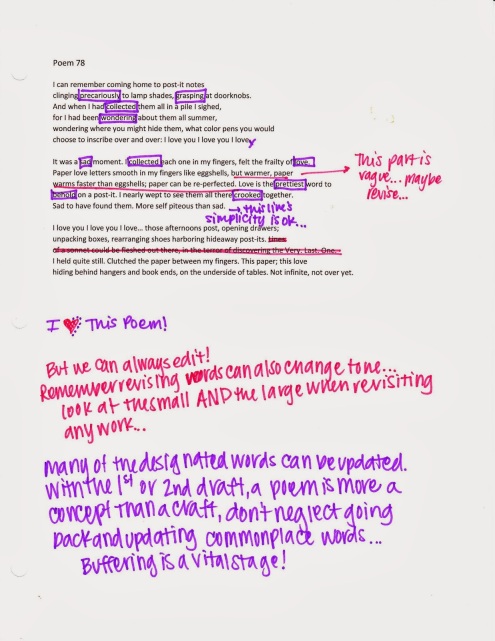 Poem 78, Post, is a study in the three uses of post: to post, the object Post-It, and the past of a moment, post. There is also a sense of one’s post as in the space the narrator occupies in the room. That one is less obvious, but a bonus.
If this kind of poem tickles your fancy there are a few things to remember when writing a multiplicity poem:
1. Don’t make it cheesey. Pick a genuine subject and focus around a word second. If you are trying to write a poem about a word, it will be just that. This poem is made better by its use of the word post, but it is still about something else.
2. At least three. I like the number three, like a triangle it is the strongest geometric shape. If you have just two uses then you might want to reconsider the poem as a multiplicity. There’s nothing wrong with a bit of a pun, but there’s no reason to write a whole poem about it, limericks have fallen from favor and are rarely art.
3. It’s still a poem. It still needs Truth, a norm, a moment, a heartline, all of those things we’ve been talking about this whole time. If you aren’t including them, you might want to hold off and figure out what to write first. See bullet point 1.
TAKWAWAY
Poetry is so much more than just words. But sometimes the multiplicity of a word can drive a little life into the piece. Remember to always make it meaningful, with a bigger picture, poetic conventions of some sort, and of course two uses of a word is hardly a revolution.
Be a master of language, in that way you will be a master of your own tongue, and your pen. Boyfriend bought me an old school dictionary and thesaurus and I highly recommend thumbing through a paper version, there are so much more inspiring connections to be made… and of course no advertisements.
Poem 78 Revised – Poem 78 Original