White men no college
never read Virginia Woolf
on the toilet in the morning
early morning, 5 am morning
not having woken up but
never having gone to bed
never having felt that sleep
was safe, or that time was plenty
holding her in hand like a white dove
Mrs. Dalloway on the roof
deck of a bus headed away toward the city
white men no college
will live forever without that scene
will grow old beautifully untouched by ache
dusted with golden flecks of hate;
white men no college
have in their canvas hands
the bald heads of daughter babies
whose eyelashes are infinite
and hold in them a future
empty of trees—perhaps—busy with busses
who might go away, far away, to college
and hold in her pale hands
a borrowed novel, a stream of conscious
a woman she might someday be.

The crooked line that makes the shore

Which calms and curls the sand back

To an image of itself.

The winding pull of water still

Remembers every grain of sand

At the bottom of the current

On the crest of a dune. It calls out

With a winded hush, what matters now

Is water, what has always been,

what will never be

Enough. A desert underneath,

Mayflies track false moons
flying sideways and over
one another to catch sight
of language written in
bright lines
spoken to them
in night lies.
The mayfly is papery
floating outward
and down
able to catch only
a moment airside
before gliding under.
Mayflies fall always for light
in a candle or a lantern
believing this to be
their guiding source,
a thunderous ache
for revival, but
things are different
now that ever street corner
has a stoplight
and every home
a well lit number.
–ECW

sorry about the random halt post last night in the wee hours.. for those of you on the email list, 1 am is not my prime hour for technology 🙂

one in the morning:
now, in my smallest form
I come to the doorway
and unravel myself
I put on the dress – the white one
from that last spring,
when we straddled the curtain
of the dressing room
and laughted with our bellies
for the last time
you said it wouldn’t be the last
white dress you bought me
but it was

Quiet the preocupied rustle
of liner and lace, the dress
once lovely dangling from the hanger
is ugly on my limbs
but I know better
it fit once
the zipper is stubborn
the buttons are stiff
but I know better
I know better until I cut my thumbs
the zipper is stubborn
because I’m different now
the dress – the armor of my loss
is a poor silhoette of my body
was made for a younger form
and I wonder, if I would know myself then
If I saw me from across a hall,
with something esle on,
on someone else’s arms
would I know me

Fascinated by the way memories shape and reshape themselves. As I try and capture such a vibrant moment in my life I am often flush with false sentations 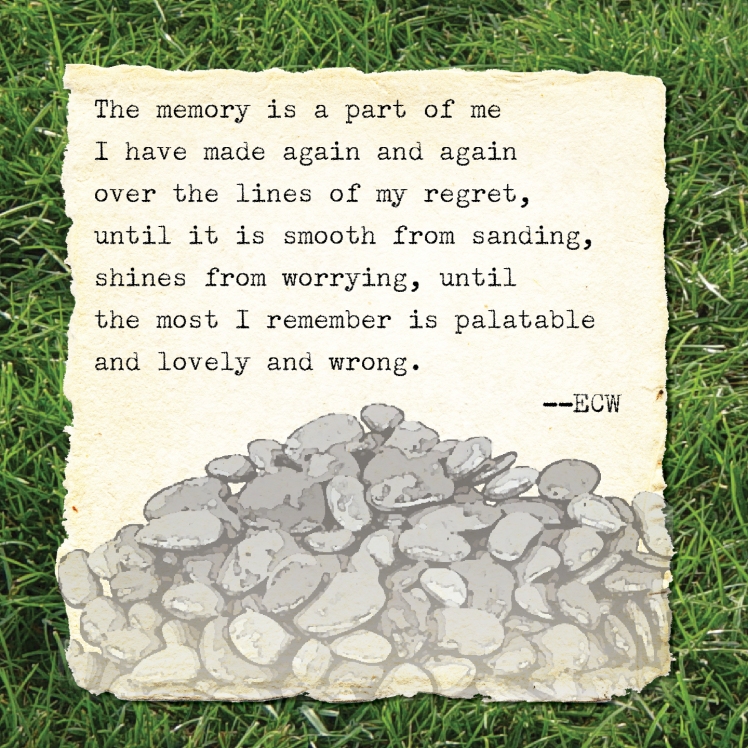 Thanks for reading & Keep Writing

There is a gravity in me

my arms my lips my legs my eye

My hips, a long winded sentence

My breasts, a run on rambling

My chin, an incantation

there is a gravity in me,

a slowed down tumble

I am older now than I have ever been

my body knows it, my body dips low

And graces ubiquity – back to the earth

she says, back to sublime

in time, the ventricle sings, due time

Here is a good example of a poem which made a 100 degree transformation in the name of a better idea.

Sometimes there are poems that start out one way and basically need to get naked to improve. Like taking a shower. Except of course that shower is going to get rid of all the junk in the poem and not BO, but maybe a little of that too. So this poem, like it says above, this was from reading a lot of Virginia Woolf. And while I LOVE VW with all my heart she does make me a little dark. So the idea here is growing together. The subject in the poem above is having issues with that togetherness, it brings her down. The subject in the revised version is having a fine time, as a mangrove instead of a victim, the togetherness feels more natural and less forced.

This brings me to my biggest challenge as a poet these days. Make the poem a positive experience for everyone. In the past my work has been a little stark, having shocking images and sometimes fringe subjects in terrible situations. I think this was because I was changing, growing, finding my voice. The old joke in poetry, at least amongst my friends, has been about that angsty teen poetry that makes the world feel aweful and dark and sad. I think mine was not too far from that category, using more complex words and deeper themes, the sentiment was similar.

My goal with these projects has been to smooth the poems, but I never really defined that. So here it is. This poem is the perfect example:

A moment that makes a poet write a poem is vital, but not all poems are vital to that moment. We are at the mercy of the muse, but that experience is ephemeral, unlike the poem.

The goal is to make the poems transcend that initial spark by making them more than th moment and better through the process of Remote Editing. (Remote Editing being the process of letting a poem sit for a year and returning when the moment is long gone)

For this poem, the process is vital for making the real crux of issues find a better entry point: through wisdom rather than passion.

Poems change because the poet changes. That’s why we edit. Never take for granted the power of a good long second look. The results will suprise you. Some poems never change while others make a giant leap into new territory. Don’t fret. The poem will always be moving toward its best version, the job of the poet and later the editor, is to make that better state a waking reality through concentrated changes and open mindsets.

Two score before my parents wed my father held the branches of three trees:

With his knife bore them holes together, and bound them with leftover string.

They grew entangled like the knots of unkept ambition, their fruition

Was never compromised by their scars. Here we are

Slack by our tendons, held together barely by bark

But you and I know the best part about broken branches.

They must grow back.

I love this poem. There was a bit of cleansing involved in the way it was written, and in that sense I find a similar relief in editing it. This is another good example of the sonnet as an indicator of control. 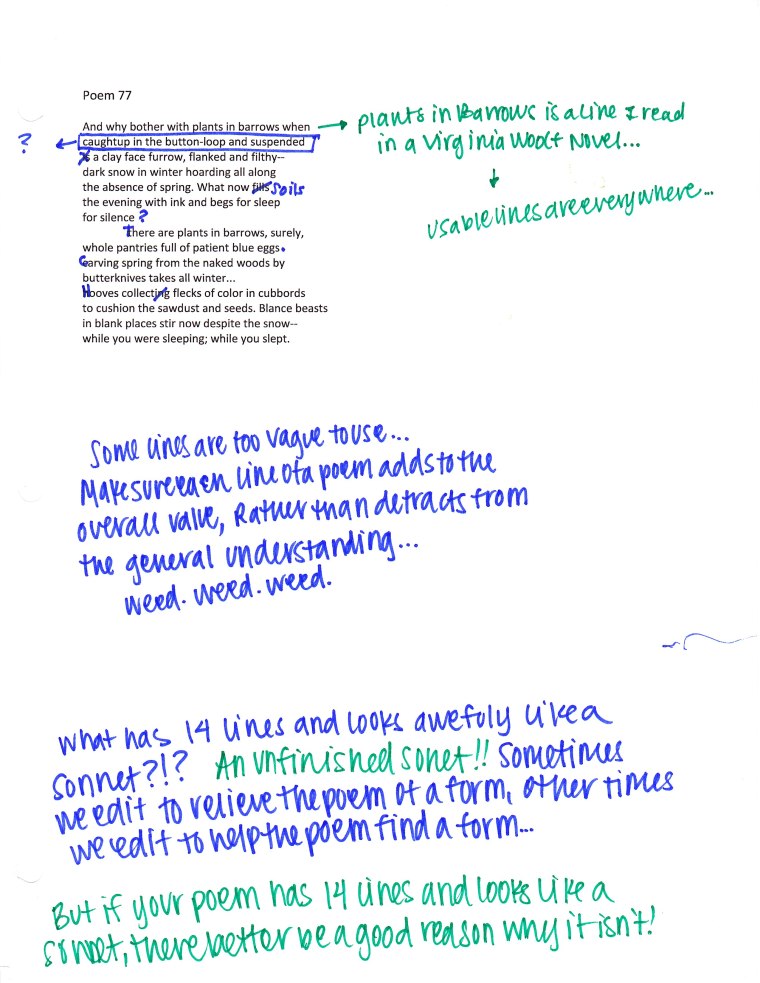 We always want that poetic control. You write the poem, whatever it becomes; you shape it with your own intentions. Don’t let a 14 line poem just lay there.

This is a broken sonnet. The middle broken line indicates that there is at least some intention there. Had there been no indentation, the poem would have appeared haphazard, even accidentally enlightened. In poetry there are no accidents, only strong decisions that become truth.

Not a real sonnet, the broken sonnet designates some break-away from tradition but maintains a connection with the essence of poetic forms. That essence: the heroic couplet, the turn the moral, the lesson, all that is present here. There are a few stray lines of course, but the essence belongs in the sonnet category and that is why the form was not traded in for a free-er model.

Consider your broken sonnets an evolution of form and not a divergence. Think of your work as a growing version of what came before. And never let a 14 line poem sit. That is what caught me on my first editing of this poem and it is what bothers me still. It’s either a sonnet or it needs more, or needs less or needs a line break. Remember the heritage you earn as poet. Remember everything that came before to give you this poetic freedom, and do what you can to respect it. The sonnet, a poetic powerhouse, may not have the following it once had, but should be remembered all the same.

I spoke before about the sonnet as a tool for editing, and how it may be used to discover the natural tendency of your writing. This poem, a sonnet at its core, does not need to be formed or broken, but instead needs to better fit into the sonnet tradition. There were a few lines that I tweaked, a few words that improved, but in further versions, I will simply work to braid it into the sonnet (broken or whole) that it must become.

Let the poem guide you, but always be in control. There is no reason to force a piece against its natural tendencies, but at the end of the day, a good poem has no mistakes, no carelessness. It is the most reduced, concentrated, intentional form of language, and in order to respect that, we must as poets strive for perfection in all ways. Whether that is intentional departure from tradition or a mere exposure of inner Truth, there are ways to control even the most unruly poems, and that is a skill only the greats can boast. For this poem, choices like the broken line 7/8 and the semi couplet in the final line pay homage to a longstanding tradition while emphasizing freedoms under my own pen.