thoughts before i start a new job

to guard against the larger

and feast on the lesser

this is not the only rule

rather a lesson of bounty;

of knowing ones station:

what stands before us

always a conflict of weight.

And yet we are burdened

with other means. A look

in a look in an instant.

And what we look for

are cues of weakness, smallness

in another. We are looking

when the vital notion is inward, 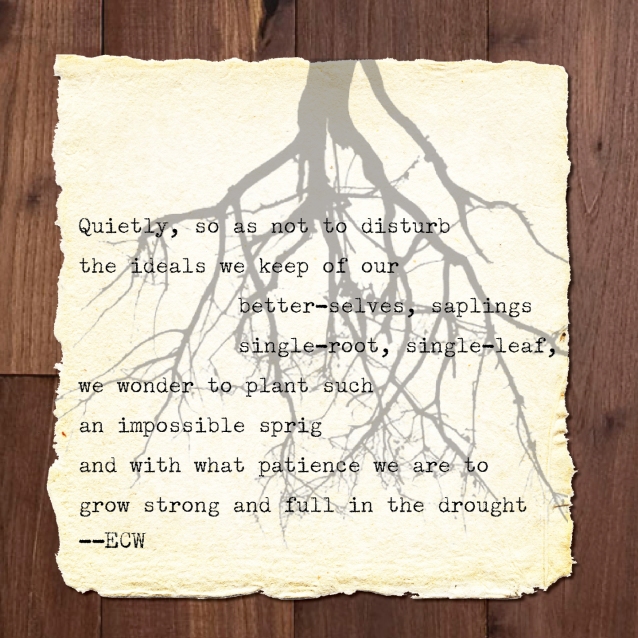 When I was a freshman in high school my best friend didn’t buy me a normal birthday present. Instead she bought me a whole box of petit fours.

I had never seen such delightful little squares. They felt like a bite size dream. I froze most of them and made each and every one last as long as possible.

I stumbled upon some lovely internet poets who are contemporary and nostalgic all at the same time. I tried to emulate their lovely type-writer cool, but my typewriter is oh so broken and the one at work (yes, there is a typewriter at the library, we are awesome) ate my money and laughed in my face!

So I fell back on what I know and made a semi-nostalgic poem-let for sharing.

There are lots more to come; I wrote 24 of these!

Hey poets. School has been kicking my bum! Hope to write more soon…
A woman came in to the library today and needed help printing her poems as gifts. They were simple but I was inspired by her blissful writer-glow. I need to write more, in a small way it’s more important than anything else

In case of wax flowers

hardly a coincidence we have

heavier with time, unfolded over and over

something humble this way grows

from the earth we come wide-eyed except

in summer, when our mouths are open &this

is the quietest place we can be: together

holding out for rain

A buttress belldrop out for beauty.

We forgive ourselves for the folly

For which we are wholly to blame.

Lit flame left out in the rain.

Watch it grow into a mangrove despite

Your best efforts to drown it.

Water and weed, we are in-between

We are shouting out through surface tension

Sometimes all you need to root

the Water and the Wake

When the sea cracked out came a memory

She was a tree limb, she is a ship—all at once

Rootless and full of sky. A ship mistress

The endless compass of the sea. How many years

How many more can she hold her breath,

Drifting on the whims of a headwind.

I am all about this new idea I am mulling over. Twins. That a poem can be two things at once, that in its progression, an idea can occupy more than a single space and yet grow in similar or opposite directions depending on circumstance. Like human beings, the poems have relationships with each other that not only depend on all three dimensions (words for 1 dimension, space on the page for the 2nd dimension, extra-ness for the 3rd like images and commentary) but also time, the real life 4th dimension that has real and tangible consequences on the writer.

Twins, in my body of work, so far, represent the growth of what I will call a writable-idea, something that is both tangible and relatable, but also heady and philosophical. That’s just a fancy way of saying the worthy subject of a poem (note, anything is worthy of a poem as long as it is approached in a poetic manner, that manner of course is the challenging bit we poets love to muddle through). Fleshing out a writable-idea takes lots and lots of thought, both conscious and subconscious. So, as a result, i find there are doubles in my collection from similar times and of similar topics that could nearly be paired together in sets. I won’t go that far just yet. In most cases one is much stronger than the other. The second twin, not by time but by maturity, almost always answers the questions posed by the first twin in their corresponding approach to a subject.

Bla. Bla. Bla. Basically, when I try to write about something I care about it comes out twice. Once iffy and then much better. The twin idea is something I am certain is not a singular phenomenon. I know from college that there are poets who experienced this (Whitman, Moore, Pound, Eliot, Bishop, Yeats.) The poems that get published by these writers all seem very singular and perfect, but go back into their works-in-progress letters and editing and you will see an internal dialogue through the poems they wrote earlier, a duel between twins. Or perhaps the birth of two queen bees in a hive, fighting to become the monarchy.

This poem needed more editing, but it also needed to break from its twin. The two together form a powerful bond, which will be reinstated later, I am sure. First, they must grow apart and reach their own potential lest they be bound together in this draft state and never improve.

Twins. The phenomenon I am only just getting my head around because I happen to be going back through my whole collection one by one. In essence, the twin effect appears when two poems written in near succession are mirrors and informants of each other. More powerful together, they demonstrate writable-idea in converging ways that reflect on the idea itself and the time they were written. Some twins will come closer, others will break apart, though all instances are evidence that writing as a process is a dynamic flowering arc.

Poem 55 is a poem that went through some growing pains. A lesson I think all poets need to know:

Poem 55 had the opportunity to see a review from a visiting JMU-grad poet on his book tour. His advice was simple, and mirrored the advice I had recieved in class all semester: Cut the top

but then upon his second reading he paused and said: Nevermind. I Like It. I don’t know what I would do.

Everyone felt that way. Even me. The top was highly figurative, it had little grounding imagery and leaned on lots and lots of tired metaphors and similies. The trouble was cutting something that on most second reads, the reader felt was important to the poem.

But what’s important, if it needs more attention than most readers are willing to promise. The sad truth about reading is that most people don’t have a second read. If it doesn’t have a first-read-stick, then be honest, does it work?

I love the first part, but when I finally made the needed cut the poem grew into its own. I could find a good title for it and make some small adjustments that were hard to see in the blaring distraction of the first section.

To be fair, the first part has some good pith (pith being the thoughtful stuff that makes poems wonderful) and so there’s no reason not to cut it up and use it somewhere else.

I had tried a variety of presentations in order to keep the top: Italics, crossed-out text, parenthesis, small and hard to read words that showed something came before. They were no good. There was no good way to present bad information. So don’t. Let yourself delete it!

Poems are only as good as their weakest link. Like everything else, they depend on all parts being equally strong. When a line of a poem or a whole section is not good enough, the poem suffers as a whole. Don’t save bad lines. Delete them, let yourself overcome the lesser parts of your writing, and see the real revisions and changes the poem needs to be great. By keeping the section for as long as I did, I missed more sophisticated changes and had trouble making a title. I thought this poem was about grief, but it was really about my dad. Had I been afraid of change I would have missed out on some serious wisdom. Don’t be afraid, take back your poem!

Two score before my parents wed my father held the branches of three trees:

With his knife bore them holes together, and bound them with leftover string.

They grew entangled like the knots of unkept ambition, their fruition

Was never compromised by their scars. Here we are

Slack by our tendons, held together barely by bark

But you and I know the best part about broken branches.

They must grow back.

Oh! The Earth bursts out between these weeds

Feeds the trees, please return these seeds as I left them:

We are a splatter of star latter, what-ever with weather, we sometimes

I thought is so, to sew the seeds of my father’s weeds and wait

By the mounds with resounding sunshine. With enough love

And when we grow the soil knows…

To look for seeds.